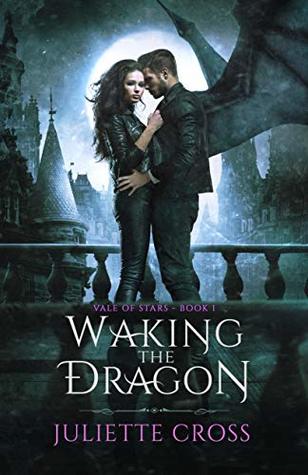 The Gladium Province is on the verge of civil unrest as humans and Morgons, the dragon-hybrid race, clash once more. But amid disorder can also arise passion.

When the bodies of three human women are discovered in Morgon territory—with the DNA of several Morgon men on the victims—it’s just a matter of time before civil unrest hits the Province. But for ambitious reporter Moira Cade, it’s more than just a story, and it may mean risking her own life.

Descending into the dark underworld of Morgon society, Moira is paired with Kol Moonring, Captain of the Morgon Guard, for her protection. Fiercely independent, Moira bristles at his dominance, and defies his will at every turn. Yet resistance proves futile when passion flares between them, awakening powerful emotions within both, body and soul. But as the killings continue, can their fiery newfound bond survive an even greater evil—one that threatens all of humanity, Morgonkind, and Moira’s very soul?…

Waking the Dragon by Juliette Cross
My rating: 3 of 5 stars

Well…I had high hopes for this one, since I’ve read the reviews and many stated how great this story and the characters are. And for the most part, it’s not a bad story, it’s just that I wanted more than what I got. I didn’t read any other books by this author and that’s why I’m not sure if this is a standalone book or a spin off series from previous books. It felt like the other couples in this book had their own stories and I wondered what they were. For me to fully enjoy a book I need to know the background of the plot and the characters and I need the plot to feel clean and not hinting of other plots that are unknown to me. So that was a shame, otherwise I would’ve enjoyed this book better. That being said, I still liked the characters, especially the main couple. They were both strong individuals that at the same time had their own uncertanties and I’m glad they overcame them together. They had almost like a love-hate relationship at the beginning and it was quite fun to see them sort out their feelings in the middle of catching a deranged serial killer (or killers). I did wish they would’ve gotten together a bit earlier in the book and not only at the half mark of the book, but oh well… As for the ending, I don’t know. I kinda liked it and most of the questions were answered but the main one is still out there. What’s the real identity of the mastermind that wants to start a new war and what are they going to do about him? I know there’s a second book out and I hope we’ll get out answers in that one. Will I be reading it? Meh, I don’t know but if I will, then for sure it’s not going to happen anytime soon.