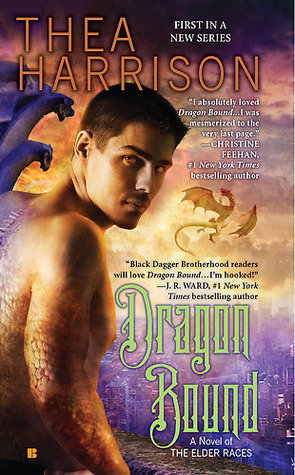 Half-human and half-Wyr, Pia Giovanni spent her life keeping a low profile among the Wyrkind and avoiding the continuing conflict between them and their Dark Fae enemies. But after being blackmailed into stealing a coin from the hoard of a dragon, Pia finds herself targeted by one of the most powerful—and passionate—of the Elder Races.

As the most feared and respected of the Wyrkind, Dragos Cuelebre cannot believe someone had the audacity to steal from him, much less succeed. And when he catches the thief, Dragos spares her life, claiming her as his own to further explore the desire they’ve ignited in each other.

Pia knows she must repay Dragos for her trespass, but refuses to become his slave—although she cannot deny wanting him, body and soul.

Dragon Bound by Thea Harrison
My rating: 5 of 5 stars

These days it’s hard for me to find a really good PNR book, so when that happens I usually just re-read my favourite ones. And this series is one of them. It’s been five years since I’ve first read this sotry and I’m so glad that I still love it today. I surprisingly remembered a lot about what’s going on plot wise but the details were a bit in the grey zone, so it was great to refresh my memory.

I love Dragos! He knows what he wants and goes for it. And usually what he wants, he gets. But this time around he’s got a lot to learn about what being in a relationship means, especially how to treat your other significant one. And that’s where Pia comes in. She does a really food job of keeping him in his place, although sometimes he’s just too hot not to give in to him. And sometimes it’s just better to listen to what he says, since you never know when you could lose your head. There were lots of bad guys after these two, that’s for sure. I’m surprised at how good Pia became with her escape tactics. Each time they were just better and better. And more bloody… But I guess she’s had a lot of practice, since she was taught from her early years to pick up her stuff and run when the danger became too much. Her wyr side is quite something. And if word got out about what she really is, well, many would kill to have her. But thankfully she now has the baddest wyr creature on her side to protect her.

The first time around I didn’t read the other characters stories, but this time I think I just might. They are kinda dope and the dialogue sure is funny. I mean, you get to read about a dark fae queen and gryphons. So why not, I’m sure I’ll like it.