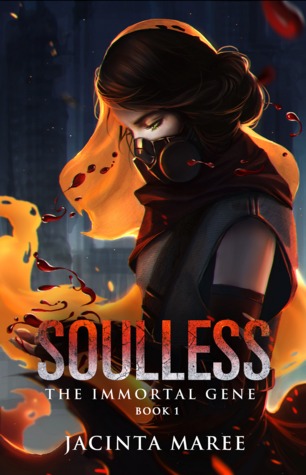 Welcome to Soulless.
We are the generation that laughs at death.

Reincarnation; what was once considered a gift of immortality has become an eternity of nightmares.

Nadia Richards lives in a world plagued by reincarnation, a system of recycling souls where all past memories, personalities and traumatic events are relived daily in disjointed sequences. Trapped within their own warped realities, not even the richest and most powerful are saved from their own minds unraveling. Madness is the new human nature, and civilizations are crumpling beneath themselves trying to outrun it.

Within a society that ignores death, Nadia appears to be the one exception to the reincarnation trap. Born without any reincarnated memories and with printless eyes, the hot tempered 19 year old quickly becomes the ultimate prize to all those wishing to end the vicious cycle, or for some, to ensure they could evade death forever.

Readers discretion: Adult language, violence and some adult scenes. For mature audiences only.

Soulless by Jacinta Maree
My rating: 4 of 5 stars

The blurb is definitely what made me want to read this book. And man, am I happy I did read it. It’s bloody fantastic! I usually don’t read dystopian books much but with this one you simply can’t help but love it. It reminded me a bit on the hunger games, since you had to survive even canibals, yes, you’ve read that right!, and everyone is out to get you. True, most of them don’t want to kill you but just use you as their lab rat. Having no soul imprint can become quite bothersome for Nadia and it definitely does not make her life any easier. Far from it. She’s one tough girl that fights so hard to stay basically just alive. And by what life throws her under, she does need that stranght and steel determination. She’s an amazing character that’s strangely enjoyable. Her parents are not even worth being called that and what they do to her is just horrible. Everyone she loves turns on her. But when things look the most grim, she finds herself an unusual ally. One that still at times want to kill or possess or sometimes also experiment on her. But hey, in her situation she can’t be picky, right? But over time I really got to like and enjoy Diesels sharacter. He’s a strange and broken fella but the more we get to know him, the more he grows on you and you get to see more than just a tough and insane ex con.

As far as the plot goes, I found it so incredibly interesting. There are people who can die but when they are re-born, so are their past memories. Yes, over the many life times that can lead some to insanity but the sole concept of that idea is amazing. You can be a doctor for over four centuries and really perfect your work or you can be someone bad and over the life times become even more evil. I love it! I know to some it might sound strange but wait till you read the book. It’s really fantastic and there’s never a dull or boring moment. You have so much action and betrayal and even some romance (a strange one, but a romance nonethless).

Since this is a trilogy, I’m super happy that I already have the sequel because the cliffy at the end is a mean yet brilliant one. I absoltely want to know what happens next.

Born in Melbourne Australia, Jacinta Maree considers herself a chocoholic with an obsession with dragons, video gaming and Japan. She writes a variety of genres including YA paranormal, steampunk, horror, new adult, dystopian and fantasy. Winner of 2014 Horror of the year and bestselling author, Jacinta writes to bring enjoyment to others while fulfilling her own need to explore the weird and the impossible.